Having now been on Hawaii’s Garden Island for more than three weeks, I’m happy to say Kauai is still as postcard perfect as I remembered from past visits. But it’s not all leis and luaus here in paradise…

After shifting around from Poipu to the North Shore to Kapaa, little brother and I were ready to settle in to our month-long condo rental in Princeville. Our second night in the condo, we were getting comfortable, fiddling away on Facebook and choosing our respective spots on the couch.

Suddenly Alex looked down at the floor near the coffee table, and looked back up at me.

“Leave,” he said firmly as his eyes grew wide and his face registered a look I know too well.

It’s the look every single member of my family gets if a cockroach enters my airspace. It’s wide eyed terror – not because they’re afraid of the bug, mind you, but because they know as soon as I see it, my uncontrollable phobia of the hideous creature will take over me, and I’m going to scream bloody murder and throw whatever is in my hands into the air and take off running, mowing down unfortunate toddlers and old ladies in my path.

I vaulted off the couch into the kitchen, not touching the floor. I paced in the hallway waiting for Alex to take care of the situation without ever letting me see the predator. We have a system, you know? He disposes of the creature, and I pretend nothing ever happened and attempt to put my mind on other things to prevent full-on freaking out.

But this time Alex didn’t do anything – he just stood there staring at the floor.

I peeked around the corner to see what in the world would keep him from just managing the situation, and he looked shaken.

“Well what is it?” I demanded to know. My super tough brother — who survived 3rd degree burns on more than 20% of his body earlier this year, who will jump off a cliff of any height, who is practically indestructible — was terrified by something I still couldn’t see.

When a 7-inch poisonous centipede appeared from below the coffee table, I shrieked. They’re supposed to be quite rare – a Hawaiian urban legend! This is my fourth visit to the islands and I’d never seen one until the freak wiggled its 1,000 shiny black and brown legs across the floor.

Thank goodness I wasn’t solo traveling at this moment. My heart rate may not increase in the presence of Great White Sharks, but killing poisonous demon-spawn worms that can bite from the head and the tail is not in my wheelhouse.

Alex brought the shoe down hard and the centipede launched into the air, landed again and continued crawling. He hit it again – nothing.

The wicked creature was indestructible. Gees, at least cockroaches (ick, I can hardly type that word) can be smushed.

After 20 smacks with the shoe, it stopped racing around, but it was still alive.

“Get me the tongs!” Alex screamed.

“We can’t use the kitchenware!” Ever the practical one, I opened every cabinet looking for some sort of pesticide I could shoot from across the room, but there was nothing.

“Just do it! Bring me the tongs, woman!”

(BTW, there is actual video footage of this event – you know me, I have to document everything – but it’s too embarrassing for the Internet.) I complied and little bro nabbed the invader with the salad tongs, taking him to his final resting place – the porcelain throne. We flushed about 300 times just to make sure he wouldn’t be squirming back up and biting us in the tush (haven’t I had enough potty/creature drama in my life?)

It wasn’t until afterward I learned you are supposed to cut them into pieces to make sure they’re dead and then burn them. Or is that vampires? Or zombies? Regardless, that just proves my point – centipedes are scary monsters and my shrieking was totally warranted. But I’m still not showing anyone the video.

And the fun didn’t stop with the centipede incident. On Saturday night, Alex and two of our friends had just run to the grocery store when I looked up from my computer long enough to see an alert scrolling across the TV – a 7.7 earthquake had rocked British Columbia and a tsunami of indeterminate size was on its way to Hawaiian shores.

I texted Alex, “Dude. Tsunami coming. Come straight home. Do NOT go to the beach.” Alex, like most little brothers, thinks nothing is serious and I’m always the annoying, overreacting, very square big sister, so he didn’t really put any stock into my reports of imminent tsunami until the sirens started to blare. Then it got real.

Fortunately, Princeville is one of the best places one could be in a tsunami, perched way up on 200-foot cliffs. While much of the island had to evacuate to higher ground, we stayed put and I’m glad we weren’t closer to the beach as gas stations were out of fuel and traffic was backed up in the low lying areas.

We decided to drive 2 miles up the road to the point at the St. Regis which overlooks Hanalei Bay to watch and wait. Given it was 10:28 p.m. when the first waves were supposed to roll in, and the full moon was obstructed by heavy rain clouds, I couldn’t make out much in the way of wave size. I am familiar with the way the waves usually break in Hanalei Bay, and for 20 minutes, the whitewater was definitely different… just not too big, thank God. The official word said there was a 7-inch increase in wave height in Hanalei Bay, which was already about 12-14 feet at the time. 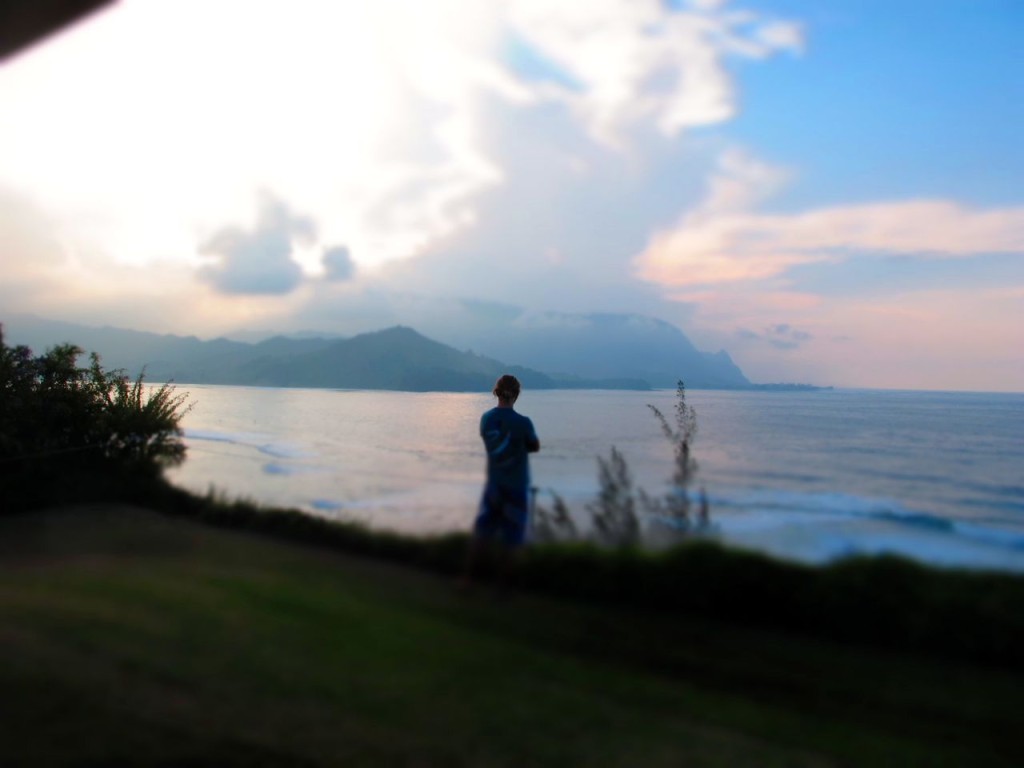 Hanalei Bay the day before the tsunami warning Hanalei Bay during the tsunami warning

An emergency plane flew low over us with sirens wailing, heading up the north shore and presumably to the Kalalau Trail, where there’s no cell service and anyone camping at the shore would be blissfully unaware of impending danger. CNN picked up my hastily typed Tweet – seriously, the ONE time I have a typo, CNN picks it up, grrr – and despite cautionary warnings that lasted the rest of the night, no damage was sustained. WHEW! It was my second tsunami experience* in the past 18 months, having dealt with an advisory in Bali after the Japan earthquake last year. I’m tapping out. No more, please.

*I feel like I should point out that I am not evil and even though natural disasters appear to follow me around, I swear I have nothing to do with it!

For the record, I was super impressed with how efficient the warning system was, and at how seriously everyone here took the situation. People evacuated quickly and safely, folks opened their homes to strangers, roads closed. Coming from Florida where it has to be a Category 5 hurricane before some people will evacuate, I appreciated how everyone I met reacted very calmly and rationally to what could’ve been a terrible situation.

Now back to our regularly scheduled picture perfect vacation… Taking a break from stand-up paddleboarding in Hanalei Bay

From leis and luaus to centipedes and tsunamis, we’re having a great time in Kauai. Check out all our photos on Facebook!

Where to Stay – Kauai, Hawaii

Kauai from the Sky

13 thoughts on “Trouble in Paradise – Tsunamis & More in Kauai”